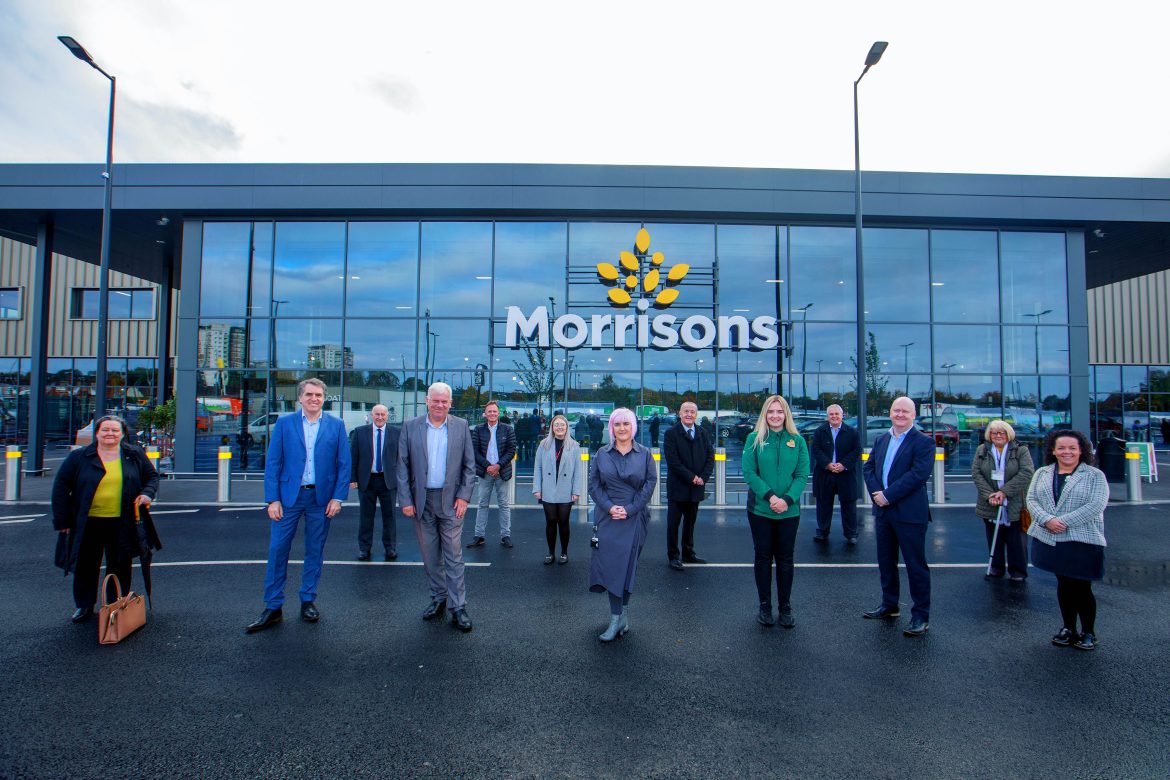 A “Sneak Peek” inside the new Morrisons Superstore

The visit took place on Wednesday 20 October – the day before the store’s official opening – and was hosted by Store Manager Eddie Pritchard.  The guests also met a range of staff who were busy preparing for the store’s opening.

The 45,000 feet2 Morrisons superstore will feature a “Market Kitchen” where meals are freshly prepared by a team of chefs.  The new format means that customers can have their breakfast, lunch, or evening meal freshly made to order by a chef at the same time as popping in for their groceries.

The menu includes fresh ciabatta stuffed with bacon, sausage, egg or mushroom (or a combination of all four).  Later in the day, there’s freshly marinated and chargrilled steak, chicken and vegetables combined with in-house slaws which can be served in a wrap, salad, or rice bowl.  There’s also a soup kitchen, crock pots serving curries and tagines, pasta, pizza, coffees, and pastries.

The Market Kitchen will provide a good meeting point or just somewhere to grab something to eat or drink before or after your supermarket shop.

Councillor Graham Morgan, the Leader of Knowsley Council, said: “I’m incredibly proud of what has been achieved in such a short space of time.  It’s been less than two years since we took ownership of Kirkby Town Centre and started the construction of the new retail development – bearing in mind we’ve had a pandemic to contend with too!

I’m delighted to be here today to see the store ready for opening and I know that residents and visitors to the town have been looking forward to this day.  This is a great achievement and I wish Morrisons the very best of luck with the opening.”

Steve Rotheram, Mayor of the Liverpool City Region, added: “This is a day that I know lots of people across Kirkby thought would never come. As a Kirkby native, it’s been fantastic to support council leader Graham Morgan and Knowsley Council with their ambitious plans to rejuvenate the Townie.

“We’ve invested £15m to help the local authority buy and regenerate the town centre, and are investing more than £60m to build a new station at Headbolt Lane. It’s been a long time coming but, because of devolution, we’re seeing the difference that local decision making over funding can make.

“This supermarket is just the start. Kirkby is an area that has always had a strong sense of community spirit and pride. Working with Graham and the council, we’re going to give people something to be really proud of once again.”

The Morrisons superstore opened on Thursday 21 October and will be open from 7.00am until 10.00pm from Monday to Saturday and from 11.00am until 5.00pm on Sunday.

The Morrisons petrol station opened on Thursday 7 October and is open from 6.00am until 11.00pm seven days a week.