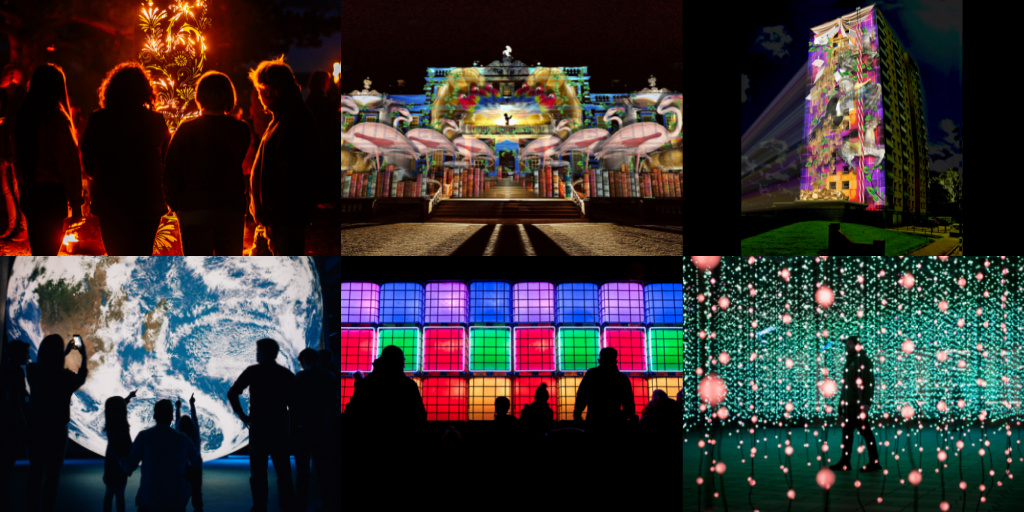 A New Dawn for Knowsley

On 1 January 2022 Knowsley will officially become the Liverpool City Region Borough of Culture with an exciting year-long programme of events planned.

To start the year, Knowsley has confirmed that it will host a series of dramatic lighting installations across the borough. The programme, entitled ‘A New Dawn’, will include spectacular ‘moments of light’ as well as the illumination of town centres, public buildings and landmarks.

The dramatic start to 2022 will catapult Knowsley into the spotlight for what will be an important and exciting year for the borough, its businesses and communities.

“The programme we have planned for the first couple of months of 2022 is really magical and something that will give every resident an opportunity to get involved and feel connected to the celebrations that will go on throughout the year.

“The idea of the ‘lights coming on’ at the start of 2022 is something quite special and will be really powerful to see – especially as our year as Borough of Culture is the first since the pandemic. That gradual movement from darkness into the light will help to build momentum and we are delighted to be working with internationally renowned artists and producers to bring these amazing moments to Knowsley. We know how much River of Light captured people’s imagination in Liverpool, and A New Dawn really will be something just as spectacular.”

Here’s what to expect from Knowsley’s illuminating start to the year: 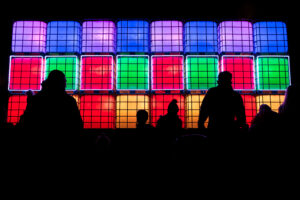 Aqualux is a stunning 8 metre by 3-metre-wide light installation that will be situated in Kirkby town centre for two weeks.

The artwork consists of 48 containers which can hold up to 1,000 litres of water – the average consumption of a household over a year. Coming to life after dark. the illuminated artwork will also be accompanied by music to create a memorable and magical experience while raising awareness of the need to conserve and protect our fragile water supplies.

A switch on event will take place on 14 January which will include Spark illuminated drummers to welcome the installation to Kirkby. Aqualux is delivered in partnership with Blackpool Illuminations. Walk the Plank Fire Garden at Festival of the Sky, Photographer Scott Salt

Over three consecutive evenings Court Farm Woods in Halewood will be transformed into an enchanted spectacle of light, music and fiery woodland creatures. Hand crafted, intricate fire sculptures will transform the space into an outdoor gallery of wonder where visitors will be able to wander through the attractions or stand and watch the spectacle unfold.

The Magic Wood – A Fire Garden by Walk the Plank will be unique to Halewood and will feature performances from Bring The Fire Project, harpist Rebecca Mills and a special family performance set in giant golden birdcage. 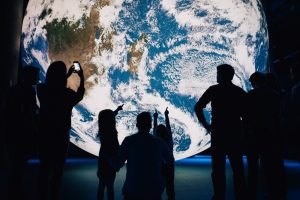 Luke Jerram’s ‘Gaia’ is an astonishing 6-metre-wide replica of the earth based on imagery and data from NASA. Suspended in the air and slowly revolving, the artwork – which will be housed in St. Chad’s Church in Kirkby – gives people a chance to see the planet, floating in three dimensions.

As a touring artwork, Gaia is famous across the globe and an exciting programme of events and activities is being devised for its visit to Kirkby. 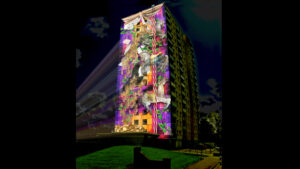 Tall Tales is a brand-new large-scale community artwork that will see Merecliff – a residential 16 storey tower in Stockbridge Village (adjacent to the M57 motorway) – animated and illuminated in light. The dramatic projection which will be accompanied by a soundtrack, will tell the story of local people and communities who have shared their stories, memories, hopes and dreams about the place they call home.

These Tall Tales, captured, interpreted and exaggerated by artists Illuminos will be brought to life over two incredible evenings in February. This event is being delivered in partnership with Knowsley Council, ForHousing and the local community. 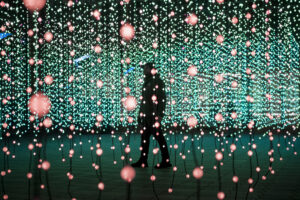 Submergence is a reflective, immersive walkthrough experience that will go on display in Sherbourne Square in Huyton Village. Consisting of thousands of individual points of suspended light, visitors are encouraged to enter the artwork to experience the amazing light illusion for themselves.

Alongside Submergence, Huyton will also be home to a second light installation still to be announced by world renowned experts Squid Soup. More details will be announced soon. 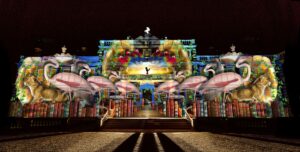 Delivered by video projection artist’s Illuminos and accompanied by an atmospheric soundtrack from renowned composer Patrick Dineen the spectacular will create a unique and memorable moment for all visitors.

Numbers are limited, so anyone interested in attending should register to be part of a ballot to receive ‘golden tickets’ to this spectacular event. Details can be found here www.cultureknowsley.co.uk/new-dawn-light-spectacular/.

All of these events will be free for the public to attend (although some will require tickets to be reserved in advance).

Full details of all the events happening as part of New Dawn are available on www.cultureknowsley.co.uk

Borough of Culture is awarded annually on a rotational basis to one of the six local authorities that make up the Liverpool City Region, as part of the Combined Authority’s culture programme.

The Borough of Culture is part of the 1% for Culture initiative which commits at least 1% of the Liverpool City Region’s annual gainshare funding (£300k) to cultural projects and activities. Established as an annual award rotating around the boroughs, the Borough of Culture helps to celebrate, amplify and strengthen the existing cultural offer, develop new ideas and initiatives that will underpin future development and legacy.

Liverpool City Region is the first combined authority to have control over culture in its devolution deal, utilising many of the region’s existing assets and talent to stimulate cultural and creative opportunities.

The Borough of Culture was first launched in St Helens in 2018, followed by Wirral 2019, Sefton 2020, currently with Halton 2021 and will be in Knowsley 2022. The programme rotation will recommence in 2023 back in St Helens.