After plans for a Shakespeare North theatre in Prescot were given the go ahead yesterday, the development is the talk of the region! But what will it be like? Get up to speed with these essential facts…

1. This has been years in the making

Shakespeare North Trust first engaged with Knowsley Council and other partners in 2005. Their aspiration to celebrate the Elizabethan heritage of Knowsley and bring back Shakespearean theatre to the area has never wavered. Throughout that time they have pushed forward with their plans securing high profile support, investment and now planning permission.

2. It won’t be your average theatre

The building will have two distinct parts. The ‘auditorium’ – which will be a sensitive reproduction of a Jacobean theatre – will sit at the centre. Whilst the modern wrap-around spaces will be home to the front and back of house facilities alongside the educational space.

The design sets out to contrast modern with historic, in effect creating a two-part theatre which is unlike many of today’s conventional theatre buildings – it might not be what people expect!

3. It is has been designed by experts

Architect Dr Nicholas Helm and his practice are the design force behind this project. Nick is something of an expert when it comes to architecture for arts and educational projects. After studying at the Architectural Association and the Bartlett (UCL) he began his PHD research on ‘Theatre Architecture and Dramatic Form.’ He is also currently writing a book that explores the context of contemporary theatre design. He and his practice are working on exciting performance space projects including The Rose Theatre in London and Bolton Octagon.

Nick founded Helm Architecture in 1991 and has been involved in this project from the very beginning.

4. History will be at its heart

The theatre, undoubtedly one of the main attractions of the new facilities, will sit at the centre of the building. It will be modelled, using historical reference documents, on the designs of Inigo Jones’ (Jacobean) cockpit theatre which was originally built for Shakespeare’s acting company when it was known as ‘The Kings Men’.

Inigo Jones was the first notable English Architect who worked directly for the King on a number of significant commissions.

5. It’s not all about what’s on the inside

Whilst every care and attention has been given to the interior of the building, the outside space and the building’s links to the existing town centre have also been given careful consideration. The building will sit at the edge of a ‘piazza’ which will become an important public space linking routes across the town centre and across to the historic Prescot Parish Church. It is the intention that the theatre at ground level will be able to be opened up in summer to be part of the outdoor landscape. And in addition there will also be a garden created, as part of the building, which will also be used for outdoor performance and general leisure use.

6. Without the plague this might never have come about!

In 1592 Shakespeare’s first play was performed at the Rose Theatre in London. He was writing for a troupe of players called Strange’s Men, who took their name from their sponsor, Ferdinando Stanley, Lord Strange, who was to become the Fifth Earl of Derby.

In that same year the plague hit London and Strange’s Men are believed to have fled north to the ancestral seat of their patron at Knowsley Hall. It was not just those living at the Hall who were to reap the benefits, as a few miles away in Prescot the first Elizabethan theatre outside of London was built.

That is where the story of Shakespeare, Strange’s Men and Knowsley began and what has led to this exciting development. 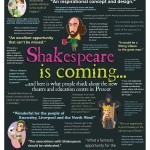 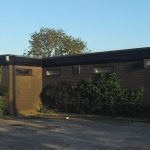