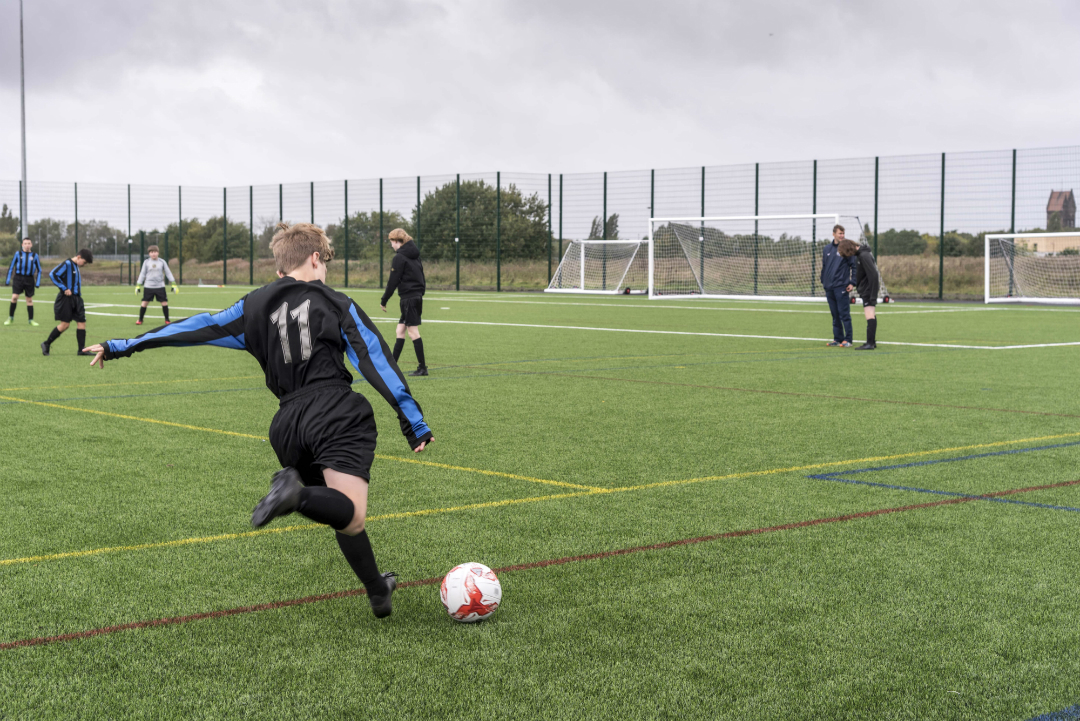 Kirkby’s new state of the art football pitch has enjoyed its first official kick off!

Lord Pendry, President of the Football Foundation, was guest of honour when players gathered at the new 3G football pitch on Cherryfield Drive to cut the ribbon and try out the new facilities.

The new full-sized, floodlit pitch, is a welcome boost for the local area with high quality facilities provided to support complete novices through to future footballing stars. Mayor of Knowsley, Cllr Frank Walsh, and Lord Pendry, President of the Football Foundation, at the official opening of Kirkby’s new 3G pitch

A number of Premier League players are from Knowsley including Steven Gerrard, Leighton Baines, Phil Thompson and Peter Reid to name just a few – and it is hoped that this fantastic new pitch could be the starting point for some more stars of the future.

And perhaps there were some future pros among in the line up of the two teams representing Kirkby High School and All Saints High School, who took to the pitch for a special opening ceremony match to put the new facilities through their paces.

The £610,736 facility has become a reality thanks to a £479,999 grant secured by Volair from the Premier League and The FA Facilities Fund, which is delivered by the Football Foundation.  The remaining investment has been provided by Volair.

The new pitch complements the recently refurbished Kirkby Leisure Centre, located on the same site, and provides better facilities for the local community to enjoy all year round.

The site will be used by Everton in the Community and Quarrygreen Football Club, along with local leagues, teams, schools and businesses. In addition, coaching sessions and walking football will also take place on the new pitch. Mayor of Knowsley, Cllr Frank Walsh, and Lord Pendry, President of the Football Foundation, cut the ribbon at the official opening of Kirkby’s new 3G pitch, watched by invited guests.

Kevin Schofield, Managing Director of Volair, said “I’m delighted to have welcomed Lord Pendry to Knowsley to see the high-class facilities we have here.  This new pitch wouldn’t have been possible without the grant we secured from the Preimer League and the FA Facilities Fund.

“This new pitch, with it’s 3G surface and floodlights, provides quality footballing facilities all year round and it will help to encourage and support more grassroots football in Knowsley.”

What’s on the agenda at Cabinet, Wednesday 13 September?