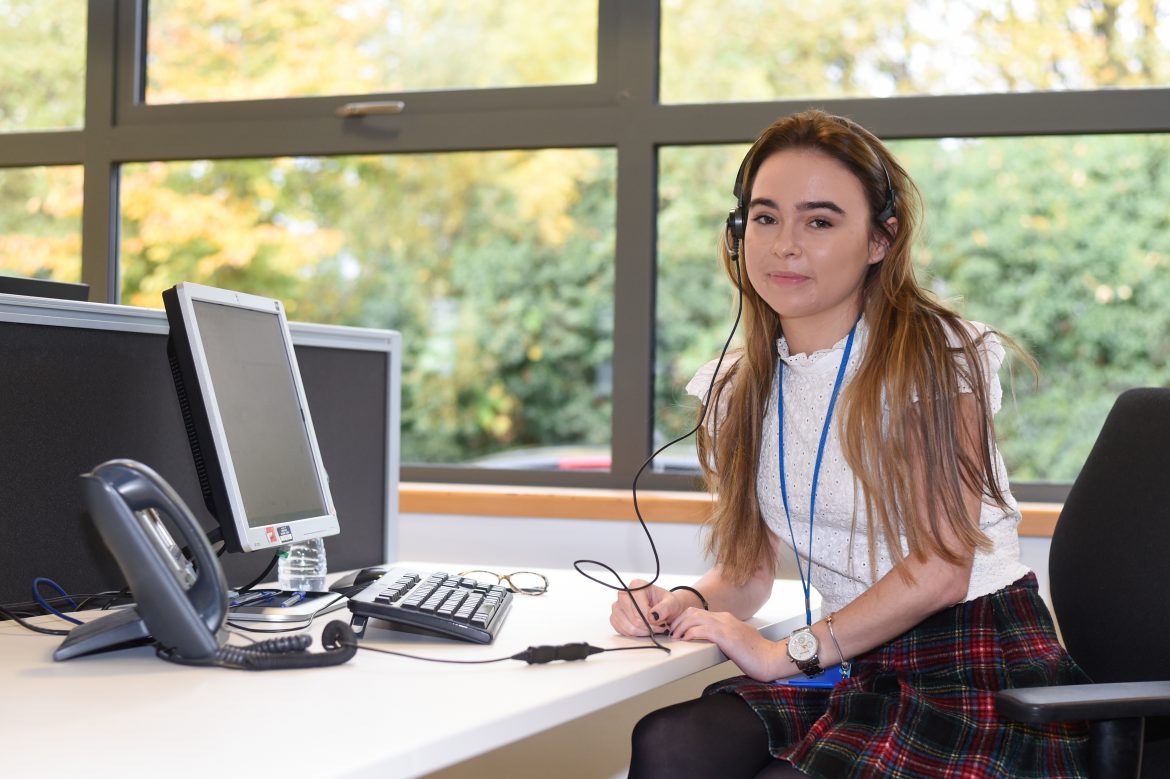 The Knowsley Apprentice has now recruited 1,000 young people into apprenticeships.

Leah Lewin, 16 from Huyton, started her apprenticeship at First Ark in September after completing her GCSE’s at the Prescot School. This marked the significant milestone for Knowsley Council’s successful apprentice programme.

In her role as Customer Access Apprentice, Leah is based in the Contact Centre and takes calls from KHT tenants, deals with enquiries about their rent, takes payments, sets up Direct Debits and helps with any payment queries.

Leah is also studying towards an NVQ Level 2 in Customer Service and as part of her development, she will soon be trained to deal with requests for housing repairs and the Property Pool service which helps people who want to move house. Leah Lewin is the 1,000th Knowsley Apprentice and works at First Ark

Leah said “I applied for the Knowsley Apprentice programme while I was still in school as I thought it would be a great opportunity to earn money and continue to learn. I’m really enjoying it. I’ve still got loads to learn but it’s going really well.”

Since 2008, the Knowsley Apprentice programme has helped over 1,000 young people to secure an apprenticeship role with many organisations across Knowsley. Many apprentices have been offered permanent positions at the end of their placements or secured employment with other organisations.

Cllr Mike Murphy, Knowsley’s Cabinet Member for Regeneration and Economic Development said: “This is a fantastic milestone to have reached and I am delighted that we have been able to help so many young people across Knowsley to get into work.

“Apprenticeships are a great way for people to earn a good wage, continue to learn and achieve qualifications, and to get some real hands on work experience.”

“The Knowsley Apprentice is an excellent programme which has made a real difference to the lives of so many young people and given them a really positive start to their working lives.”

Karen Prendergast, Leah’s manager, said: “Leah is doing really well; she’s built excellent customer service skills in the short period she’s been with us and has become a valued member of the team and of the organisation”.

“At First Ark we think apprenticeships are vital for younger people to get a head start on their careers. We have worked with the Knowsley Apprentice programme for 8 years, offering approximately 20 places per year to people from our local communities. Many of our apprentices have gone on to be offered full time employment both here and outside of First Ark, which makes us immensely proud”.

If you’re interested in becoming a Knowsley Apprentice, you can find out more and view current vacancies.

If you’re a business interested in recruiting an apprentice, call the team 0151 443 5953 or email theknowsleyapprentice@knowsley.gov.uk