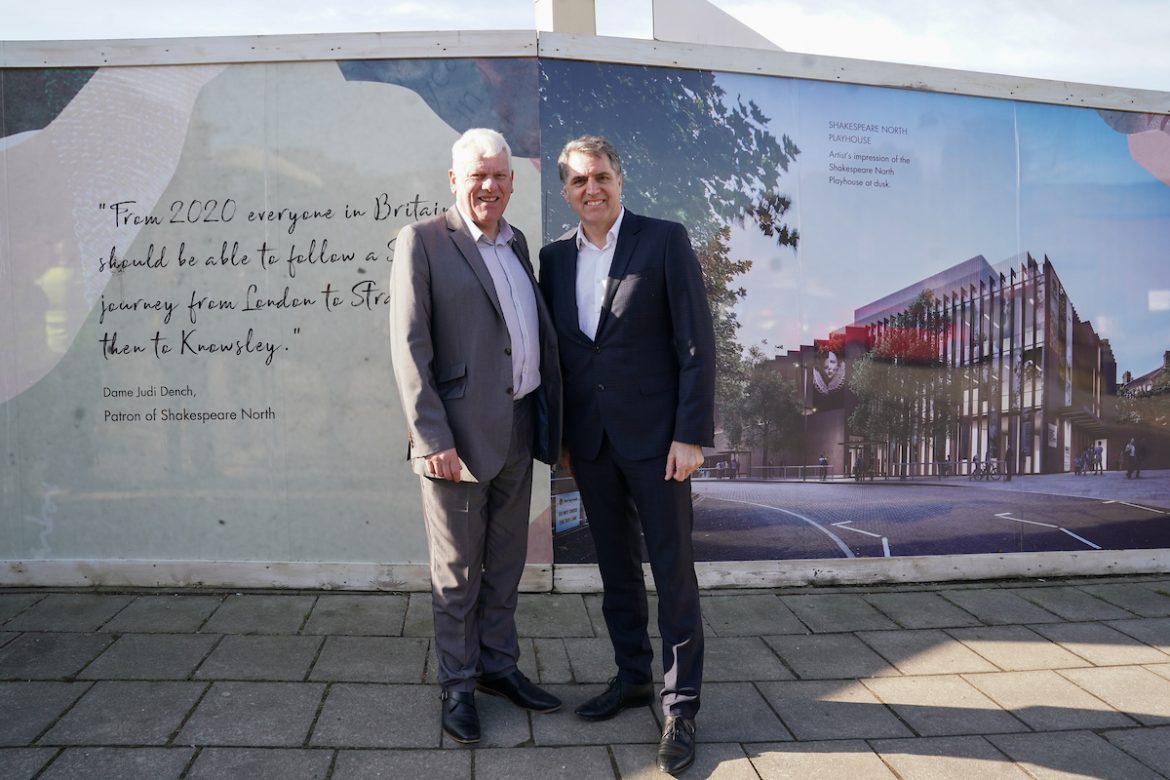 On a recent visit to Prescot town centre, Metro Mayor of the Liverpool City Region Steve Rotheram, witnessed the positive changes happening in the area, had the opportunity to meet with local businesses and viewed progress on the major projects happening in the town.

Leader of Knowsley Council, Cllr Graham Morgan, accompanied the Metro Mayor on a walking tour starting at Prescot train station where part of an £8m Liverpool City Region (LCR) Combined Authority funding package will be invested into major upgrades. This will include a remodelled car park with additional spaces, new lifts providing access to both platforms, and improved walking and cycling routes between the station and the town centre to help direct visitors. Steve also met with Carl and Simon, the owners of Station Coffee House, a popular coffee shop in the former stationmaster’s house at Prescot train station. The next part of the tour took in High Street, Atherton Street and Eccleston Street, highlighting the work of the Prescot Townscape Heritage Initiative. The project, supported by the National Lottery Heritage Fund, has restored and repaired many of Prescot’s historic buildings and spaces making the town centre and its buildings more attractive and vibrant. This includes the newly opened eateries Down in Albion and Pinion Bistro.  Eccleston Street will also benefit from extensive public realm improvements as part of the £8m LCR Combined Authority funding package.

The next stop was at Market Place which is the single biggest THI project. This area is being transformed into Imaginarium Bistro, an Italian and Mediterranean inspired restaurant, and a new piazza that will host community events and activities year round. This new bistro and space will be open in the summer.

A few steps away, Steve visited the site of the Shakespeare North Playhouse, where the new iconic venue will be up and running by 2021. For 364 days of the year it will provide a wide range of cultural opportunities for local communities and visitors alike. The Metro Mayor impressed the group by quoting fluently from Henry V, which he had studied at school! Metro Mayor Steve Rotheram and Cllr Graham Morgan on the site of the Shakpeseare North Playhouse, with the team from Kier.

At the end of the tour, Steve had the opportunity to meet and talk to some of the town’s independent businesses retailers and bar and restaurant owners who are huge ambassadors for Prscot and are working together to promote Prescot as the place to be and visit. “It was a pleasure to welcome the Metro Mayor to Prescot and to show him around the town centre. Prescot is a really special place with such a lot to offer and so many more exciting things to come. It was great for Steve to see this for himself and to see the many new developments that are already in progress including the Shakespeare North Playhouse and how the Combined Authority funding will help with the transformation of the town.”

“It was fantastic to get the grand tour of Prescot with Knowsley Council leader Graham Morgan, and particularly interesting to have the opportunity to talk to people from a range of independent businesses.

“There is a real buzz about the town ahead of the Shakespeare North playhouse development, which we are supporting as a Combined Authority, along with improving accessibility through the rail interchange project.  With so much going on, the future is looking really bright for Prescot and I look forward to seeing the town continue to thrive.”

The Liverpool city Region Combined Authority has committed £14.5 million towards development in Prescot town centre. £6.5m has been awarded to the construction of the Shakespeare North Playhouse, a unique theatre and education centre that will attract visitors from around the world and £8m towards the Prescot rail interchange project.